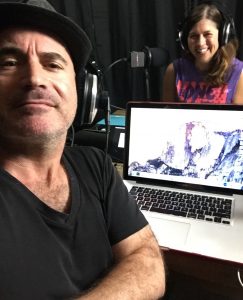 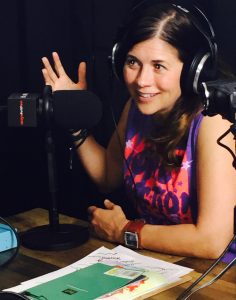 Hilarious actress and comedian, Mary Gallagher, shares her fascinating life story – from growing up with two Marine parents in Wisconsin – to “making it” in Hollywood on “Friends,” “How I Met Your Mother,” and many other huge shows!

Plus, Mary tells us about the day she broke her vegan diet thanks to Tom Selleck and a hot dog! 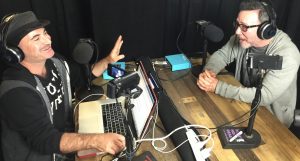 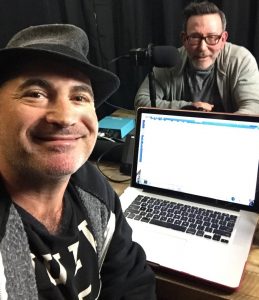 Richard Rosenthal (on right) has been a Beverly Hills “hairstylist to the stars” for 40 years! And he has the wild, shocking, must-hear, celeb stories to prove it! From John Belushi to Carrie Fisher to Bette Midler – Richard tells all!

Plus, Richard opens up about his personal life. He shares with us the shocking way he learned about sex as a teen in the 1970’s and we hear about the traumatic, life-changing way he lost his virginity.

Award winning sports journalist, Josh Peter, gives us a look inside his fascinating world as a USA TODAY reporter. We cover everything from what it's like to break a huge national story to the new and fast-changing pressures print reporters must face.

Thanks to Twitter, Facebook, and the Internet, today's demand on a reporter have never been so great. And that suits (adrenaline junkie) Josh Peter, just fine!

Chris McLean, the “Money Guru,” shares his brilliant system that will give you newfound clarity around your money and your life! Over $100,000 in credit card debt and forced into bankruptcy, Chris turned his life and finances over to this simple strategy that everyone – including the very wealthy – will benefit from. You can't afford to miss this episode!

If you've read the headlines, you know many of Chicago's toughest and poorest neighborhoods have become a shooting gallery – racking up a record number of victims.

And here to offer fascinating (and alarming) insight into the out-of-control violence, is veteran Chicago defense attorney, Jeff Levine. Dedicating his life to battling it out in the legal trenches of The Windy City, Levine's voice on this tragedy must be heard! And what he has to say… just may shock you.

“Freedom” is the theme of Katy Michaels' new life, as she shares with us the story of her incredibly inspiring transition from male to female.

Radiating joy, self-acceptance, and self-love today, Katy has gone through a lot to get here. Overcoming childhood abuse, addiction, depression, and suicide attempts, Katy is a true living miracle.

Katy's vulnerability and wisdom may leave you asking yourself the question she has finally answered: What does true “freedom” mean to you? And are you living in that “freedom?”

From high school drop out working at the phone company… to writing/producing on “The Cosby Show,” Lore Kimbrough accomplished the impossible!

Growing up in foster homes with little stability and few role models as a child, hear how this strong, brilliant woman beat the odds to create a life for herself the day Bill Cosby personally wanted her on his staff.

Plus, Lore tells you what she think about the Cosby “sex scandal.” And for the first time, Lore talks about her personal experience working with him!

In 2013, gifted comedian Taylor Williamson, went from near obscurity to a mega-superstar in just weeks on NBC's talent competition show, “America's Got Talent!”

In this must-see/hear interview, Taylor gives you an unforgettable peak behind the curtain as he shares the fears, challenges, and brutal pressure he faced week after week, as he performed LIVE on TV for millions of viewers.

Also, Taylor reveals to you the one joke he performed on AGT that producers begged him not to do. Ironically, it turns out that this joke changed the course of Taylor's entire career!

Plus, does Taylor think he and AGT judge, Heidi Klum, really had a chance at true love? Taylor's answer is going to surprise you!

And we learn about Taylor's surprising early life that has never been revealed anywhere!

As Keith walked past me, he asked me for money to buy a beer. I’ve always wanted to interview a homeless person right off the street, so I asked if he would like to immediately be a guest on my show. (The studio was around the corner on Olive.) He agreed and within minutes he was sitting across from me with headphones on, sharing his life story.

This bearded, gray, weathered, and frail looking older man who entered the studio as a mysterious stranger… left an hour later as a special friend. I will forever be grateful to Keith for opening up his heart to me (and to all of you), and for sharing his very human challenges and strengths.

In addition to Keith providing an invaluable, inside look at what it’s really like to live for years on the street, he also vulnerably exposes the addiction and trauma that likely led him there. Like peeling away the layers of an onion, as our conversation unfolds, Keith reveals the tragic complexities and contradictions of his thinking… while also peppering our talk with surprising, sage-like insights.

I never did buy Keith a beer. But he did leave with a pocketful of cash and hopefully with the same love in his heart that I still have in mine for him.

In this uplifting and inspiring episode, TV star Benjamin King bravely opens up about a personal health challenge that he’s kept a secret for years.

Despite all of the extraordinary obstacles that have been in his way, Benjamin has “made it” in perhaps the most difficult business in the world.

Other people in his place may have give up on their dreams long ago. But not Benjamin. He proves that anything is possible…not just for him… but for anyone with the right mind-set!

You may know Benjamin from his role as the dad on the hit Disney teen sit-com, Liv and Maddie! His credits also include: Grey’s Anatomy, CSI Miami, Mike & Molly, Weeds, Scrubs, Six Feet Under, ER, Judging Amy, and many, many more shows!